Not sure what to get? Use these tools to help you find a charging solution that works for you.

Easily manage your charging network with iEVSE, EvoCharge’s WiFi electric vehicle (EV) charging station. With true OCPP and WiFi connectivity, you choose the third-party network service provider for your EV charging station or connect to your own WiFi—whichever works for you—giving you control and access to charging capabilities. 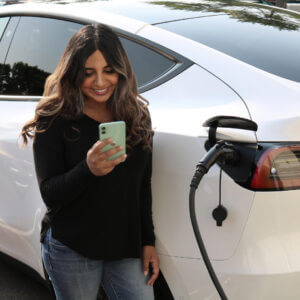 Connecting your charging station(s) via your local WiFi allows you to link to third party network providers and local utility companies. Third party networks provide a multitude of features, including controlling access, setting up payment options, and tracking performance. Some networks will also help you connect to your local utility company so you can charge at off-peak times to save money. Rebates on smart chargers are also available from many local utilities. 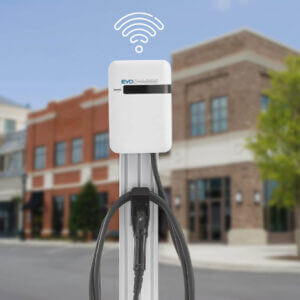 An Open Charge Point Protocol (OCPP) charging station doesn’t require using a specific network to work and it can be networked through any available provider in your area. This means you can still charge without being connected to a third party network, or change to a new provider. EvoCharge’s iEVSE and iEVSE Plus charging stations are OCPP 1.6 certified, allowing you to connect to any open network, including our three preferred network partners: EV Connect, Greenlots and Chargie. The best part is we’ll preconfigure your charging station to work with one of those three providers before shipping and you work with us to set up your account, billing, and more. 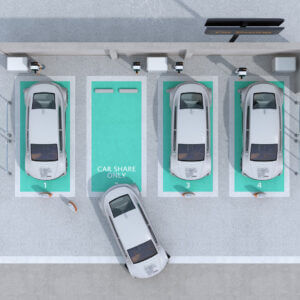 If your parking area doesn’t have access to WiFi, you can save money by purchasing one iEVSE Plus station to connect via 4G LTE, and the rest of your units can be the iEVSE. The Plus station will share the network connection with the other charging stations, allowing you to only pay one wireless bill. 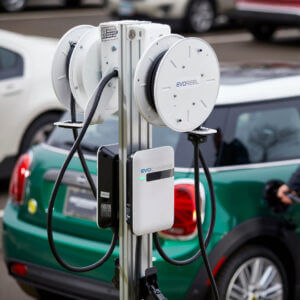 EvoCharge’s industry leading cable management solutions are the best way to keep your charging areas safe, organized and clean while protecting the charging cables from wear. By automatically retracting the cable onto the reel when not in use, the EvoReel keeps cords off the floor and at arm’s reach, improving cleanliness, safety, and efficiency. The Retractor keeps your charging cable supported overhead and out of the way. With simple installation options, the EV Cable Retractor uses a spring-loaded tether to suspend the cord. 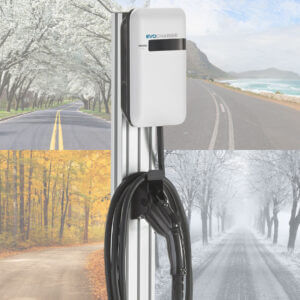 EvoCharge charging stations are NEMA 4-rated. The National Electrical Manufacturer Association (NEMA) is a standard rating that defines the type of environments in which electrical enclosures can be used. NEMA 4 rating provides protection of the equipment inside the enclosure against falling dirt and dust. It also provides a degree of protection from the harmful effects due to water, rain, sleet, snow, splashing water and hose directed water. The charging station will also withstand the external formation of ice on the enclosure. 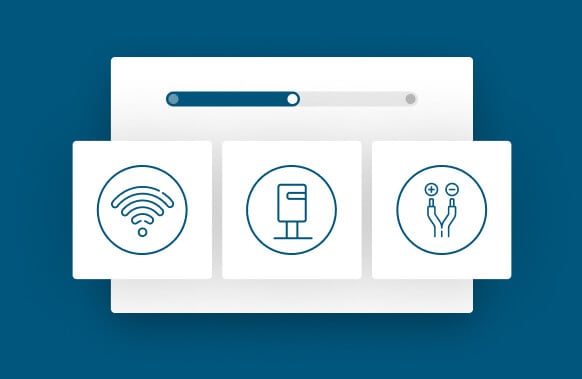 Whether you’re just getting started or are looking to replace your current WiFi EV charger, check out our easy-to-use Charging Station Builder tool to help you find the best charging station for your needs.

Compatible With All EVs and PHEVs

The iEVSE WiFi EV charger is fully compatible with nearly all Electric Vehicles (EV) and Plug-In Hybrid Electric Vehicles (PHEV) sold throughout the United States and Canada. Tesla vehicles do not use the standard SAE J1772 plug, but an adaptor is available which allows the J1772 to work with Tesla. The adaptor is typically included with the vehicle or available to purchase online.

To learn if your WiFi EV charging station products and installation are eligible for federal, state and utility incentives and rebates, visit our incentives page!

Have questions? We’re here to help.